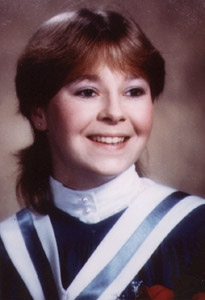 On Sunday morning, Grey Cup Day, 1991, Janet Edith Dooley was alone in her car, stopped behind five others at an intersection. Without warning her car was struck from behind by a heavy delivery vehicle driven by a drunk driver who had been intoxicated for several hours. Janet was severely brain-damaged by the impact and was in a coma for 36 hours before she died. Her car was pushed into the others, nobody else was injured; the drunk driver received a minor cut.

The following message was provided by Janet’s loving parents, Stephanie and Bill Dooley.

The death of our daughter has impoverished our lives beyond measure. She was the breath of spring in our family, a happy-go-lucky person who had a lot to live for and much to give the world. The life she had lived for a short, bright 25 years was taken by a drunk who paid only 23 months in jail for it. The world will never know how much it has lost.

In 1991 Stephanie Dooley began her support of MADD Canada’s Mission: To stop impaired driving and to support the victims of this violent crime, by taking on the role of Community Leader for Halton Region. MADD Halton Region is now a charter Chapter of MADD Canada (Mothers Against Drunk Driving) and was officially recognised as such in 1993.

We are one of over 100 Chapters across Canada, made up of concerned citizens and victims committed to stopping the crime of impaired driving.

About Us
Make A Donation
Donate to MADD Halton Region using PayPal!