Jim and Sharon-Lee Wideman were cofounders with Jack and Carol Wilson, who each lost a son named Scott, in two separate hay ride tragedies September 1984 and April 1985, involving impaired drivers.

The compassion and support of the Guelph OPP and Wellington Crown Attorneys during a five year ordeal in the courts were a key factor in giving the Widemans the confidence that ordinary citizens could walk alongside professionals in a community cause and experience cooperation. After numerous telephone calls of invitation to people in Waterloo and Wellington areas, the inaugural meetings of P.R.I.D.E. (People to Reduce Impaired Driving Everywhere) was held at Bingeman Park Lodge with a combination of media, police, politicians, health care workers and concerned citizens, including several victims of impaired driving crashes. John Bates and Helen Callum, founders of P.R.I.D.E. Toronto Chapter were guest speakers and motivated those present to participate in a worthy cause. Most of the board was established that evening and the rest shortly after. 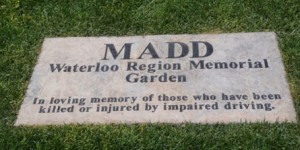 In 1993, P.R.I.D.E. (an Ontario registered charity, was changed to MADD Waterloo Region Chapter of Mothers Against Drunk Drivers, under the umbrella of the newly established MADD Canada. As a recognized national organization, there was now the foundation to lobby for changes in federal legislation. Jim Wideman was President of the Waterloo Chapter until 1995 when he accepted the position of the first Executive Director of MADD Canada. During the next two and a half years, rapid growth developed, bringing the number of chapters across Canada from 13 to 29, and establishing solid financial foundation under Jim’s administrative skills.

The Wellington Chapter branded on their own in 1995 with several directors from that area leaving the Waterloo board, including long time member Lynn Fisher who became President and Ervin Musselman, founding board member and court monitoring director. Guelph OPP and Guelph Police Services followed and police in other districts also became involved in the vast area of Wellington County.

About Us
Make A Donation
Donate to MADD Waterloo Region using PayPal!