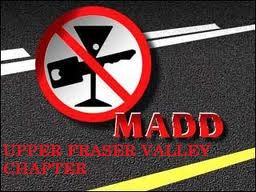 Scott Lowther, was our first Chapter President. He worked diligently with MADD Canada to start our Chapter in 1999. Joan Allen was the next president and she served for 4 years.

Burt Graham became the next Chapter President and soon partnered with First Nations and Chapter volunteers. The MADD Canada 2006-2007 Multi Media “Mind Control” had the first ever First Nations story.

Past volunteers, Patty and Lindsay, spearheaded our 1st ever “Strides for Change” in 2007. Also in 2007, we held our first “Choose Your Ride” at local high schools.

Our past Volunteer Nation President, Margaret Miller, attended our 2007 Red Ribbon Launch and our first ever “Mock Car Crash”. At that time she presented Constable Angelina Bowen (current President), of the RCMP, with the “Terry Ryan” award for Police Excellence for the BC/Yukon Region for 2006-2007.

Our current Chapter President Angelina Bowen stated, “I am inspired by the passion of our volunteer and board members.”

The Chapter Board & Volunteers are an amazing and diverse group. The knowledge, creativeness, and drive is what is making the MADD UFV Chapter stronger then ever!

In 1990, MADD Canada was formed to create a national network of victims and concerned citizens working to stop impaired driving and to support victims of this violent crime.

Please make a donation to MADD Upper Fraser Valley by clicking below.

MADD Canada is our national site.

DriveSmartBC is an educational resource for drivers who travel on the highways of British Columbia.

#TAXI helps you get the first available taxi or the cab company you want. That's # 8-2-9-4 on your cell.